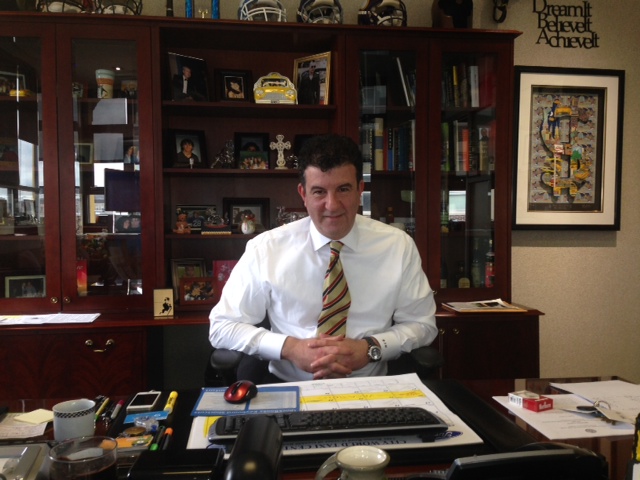 Yellow taxi cabs are the epitome of New York – no New York City movie is complete without the lead haphazardly trying to hail down a taxi in the middle of a busy intersection…usually in the pouring ran. We’d like to introduce you to the man that’s responsible for getting thousands of New Yorkers where they want to be: Billy Messados.

President and CEO of the Queens Medallion Brokerage, he came to America from Greece in 1985, with nearly no money in his pocket, and barely knowing any English. He drove a cab. And then he bought a cab. And then he teamed up with his partner Tony, and bought even more cabs. And now he has 648. Just a little bit more than the single one he started with. The brokerage supplies insurance to thousands of drivers.

Billy tells us he’s always had entrepreneurship in his blood. He fondly recalled his days as a boy in Greece, telling us with a huge smile of all the different schemes they used to put together to make some quick money. Once, he says, they found out UNICEF was selling cards to raise money, but only from a store in Athens, far away from his hometown. He got together with his buddies and bought a thousand cards, selling them door to door. In a week they made what most people at the time made in months…and then they knocked on the door of a UNICEF representative. It was a short lived business.

Coming from a Greek background, Billy always had a dream of opening up a space that resembled the classic Greek tavernas – places to enjoy music, food and company. He recently made this dream come true by opening up Melrose Ballroom, 4 months ago. The venue is home to the largest video wall in the country, a hydraulic stage and top of the line sound system. The ballroom plays house music, and is home to everything from weddings to bat mitzvahs, ethnic events and birthdays.

Sitting at the top of a billion dollar company, Billy tells us it has taken hard work and determination to get there. “Everything starts small, you have to take it slow and let it evolve,” he says, “I came to Astoria at 18  and I’m 48 now, and my business has never stopped evolving.” He tells us he wants to inspire young entrepreneurs, like his two sons, to look to the future and have a vision. Everyone wants to have a millionaire lifestyle, and everyone wants it quick – but there’s no alternative to hard work. There’s three ingredients you need to make it: Dedication, being hard working, and being smart. Without these, it’s impossible to make it. He left us with an analogy: “All aspects of life, relationships, business, anything, are like a lemon tree. When you plant it, it needs water. You need to prune it. You need to fertilize it, make sure it doesn’t get blown over. But one day, after years and years of hard work, it will bear fruit for you to feast on.”