Update: The Inspired Word Was PHENOMENAL. 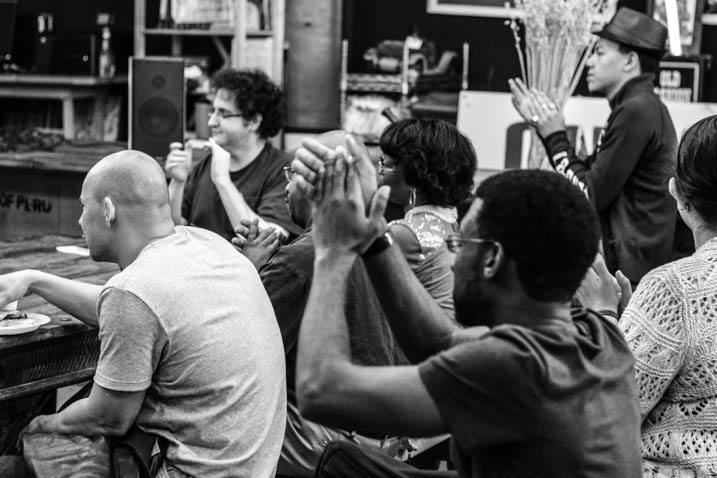 A few days ago we told you guys Mike Geffner’s The Inspired Word was coming to Queens, and it was an amazing event.

The venue is probably the most perfect place Mike could have chosen to bring The Inspired Word to. The performance space was separated by a black curtain, and I was blown away when I walked in. Every seat was filled. There were even some audience members who decided to plop down cross-legged and enjoy the show.

Now, let’s be honest. Just between me and you. Sometimes open mics aren’t fun. But The Inspired Word has a vibe like nothing I’ve ever been to. People didn’t come for their friends and leave – they stayed for the entire show. The audience was engaged and everyone was clearly having a great time. The best way to describe the show was comfortable. It was intimate, and friendly. Everyone that performed got cheers and high fives and smiles from everyone in the audience, no matter if they were new-comers to the scene or performers that have been around since the inception of The Inspired Word.

There were all types of acts that went on – from spoken word poets to singers, all varying styles and backgrounds. It was seriously eclectic. The show was hosted by Sylvana Joyce who got everyone laughing and kept the vibe going between acts.

The Special Showcase Featured Artist of the night was Audrey Dimola, who seriously blew us away. Each of her poems was filled with so much emotion and electricity. Her voice filled the venue and had everyone engaged and entertained – she was an amazing artist to open up the series, and will undoubedtly continue to impress.

The Inspired Word is here to stay, and will be adding an extra hour to the show. They’ll be at Coffeed EVERY Wednesday at 6:30, and it’s a show that you should seriously check out. If you’re interested in performing, I can’t think of a better place to get started than at Mike Geffner’s series. (who, by the way, took all these pictures. Journalist, poetry curator AND photographer? whaaaat.)

If you want to perform, sign up in advance here to be guaranteed a spot! You can see all the details here, and check out more pics below!

Surprise! This is what a Give Me Astoria writer looks like.