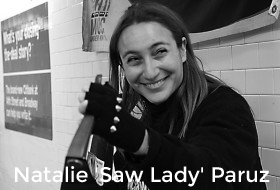 Natalia Paruz grew up as a dancer, and came to New York to train with the Martha Graham Dance Company. She taught dance, and was in dozens of productions and musicals. Then, one day after leaving Lincoln Center, her whole life changed. Natalia was hit by a car, and suffered permanent injuries to her upper spine.

Her dream vanished. She was devastated. Until one day she was on a trip to Europe and saw a man playing a very unusual instrument – the saw. Suddenly, there were sparks…and the Saw Lady was born.

As you can probably guess, there were no saw classes offered in New York..or anywhere for that matter, so Natalia set off on a journey of self-teaching. She created techniques that had never been done before, and began to perfect this art that had nearly died out in World War II.

Now, Natalia puts together the New York City Saw Festival, which happens every year. “It’s a growing art form,” Natalia told us, “When I first began, I could only find 4 saw players. Last year’s festival had 55. Astoria became the Mecca for saw players.” Recently, the festival set the Guinness World Record for the largest musical saw ensemble, with 53 players. They smashed the previous record set by 28 players in Poland.

Natalia’s most recent project was a movie filmed right here in Astoria, where she appeared alongside Richard Gere. The movie, called Time Out of Mind, stars Gere as a homeless man, and Natalia appears as, you guessed it, a saw player. “The director saw me playing in the subway years ago, and when he started to shoot this movie, he came to find me. It was amazing that he remembered me for so long.” She’s also on an awesome off-broadway show called Sawbones, that tells the story of the first African-American doctor in the Civil War, and is actually based on a true story. You can check out more info on the show here.

If you want to see Natalia play, you can regularly find her busking in Herald Square, Union Square, and Times Square. “Busking is the soul of New York City,” she says, “Other cities don’t have the freedom of expression we do. We’re so fortunate.” And we agree. Can you imagine waiting for the train without the amazing sounds of subway buskers? We can’t.

You can find out more about Natalia Paruz here, as well as pick up copies of her EP and CD’s!