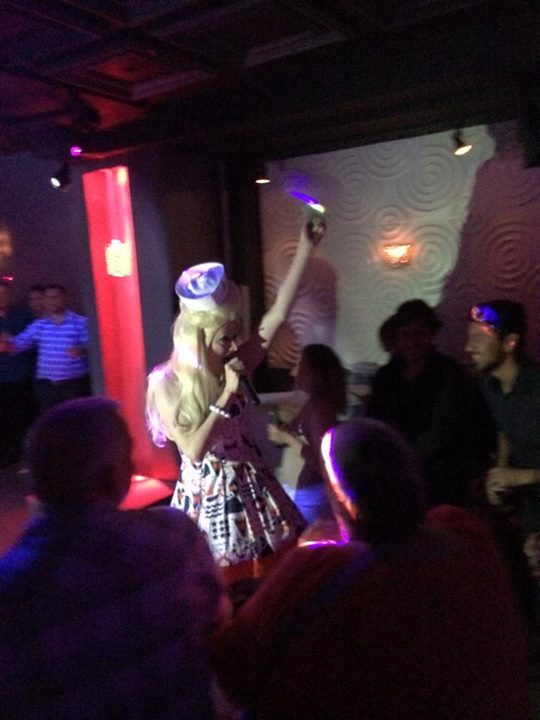 Nick Lion spent most of his life traveling from city to city, taking up residence in homes across America with his mother. There’s one place, though, that they kept coming back to: Astoria. So if Nick was going to put down roots anywhere, it was going to be right in the neighborhood his mother adored, the neighborhood she settled down for thirty years in.

Nick opened up Icon in 2013 to bring a new life to the gay community in Astoria. He felt there was no where special enough for the community, and decided that needed to change, and so Icon was born.

The aim of Icon is to be inviting, to be posh, to be fun, and to be the place for Astoria’s residents. “It’s Rodeo Drive meets Manhattan meets Queens,” Nick told us. Icon really is a thing of beauty – the vibe and decor is high class without feeling over-the-top. Hanging above the bar are faux-diamond chandeliers, and the black exposed brick walls are diamond encrusted as well. Flashing lights bring the entire club to life.

Of the entertainment, Nick tells us he didn’t want to same-old lip syncing drag queens that clubs of the past have had. “I wanted RuPaul caliber performers – high class, upscale entertainment.” The same is expected of the staff, all of whom are hand-picked by Nick himself. “Icon is a home for everyone. Gay, straight, male or female, we want everyone to walk in and feel like royalty. We want our staff to be friendly. I wanted Icon to feel like an extension of my living room – friendly, inviting, and comfortable.”

The name Icon reflects the symbol of the club: Marilyn Monroe. From a young age Nick was drawn to Marilyn Monroe, and when trying to think of the perfect “icon,” no one else came to mind. “Everyone knows her. She’s still current and relevant, and is the only icon who has truly outlasted.” The statue of Marilyn Monroe has become a tourist attraction, with club go-ers regularly posing for pictures with it.

Nick tells us he wants Icon to be the beginning of a legacy. “I want to tear down the barriers, and bring more gay clubs to Astoria. There should be just as many gay clubs in Astoria as there are in Manhattan.” Icon is doing just that – breaking down barriers. From their upscale environment, to their amazing drink specials and their friendly staff, Icon is becoming one of the best clubs in Astoria.

You can check out more on Icon at their Facebook, and keep an eye out for them in the upcoming Pride Parade in June, which they are one of the sponsors for.