Temple of Comedy: A Night Filled With Laughs 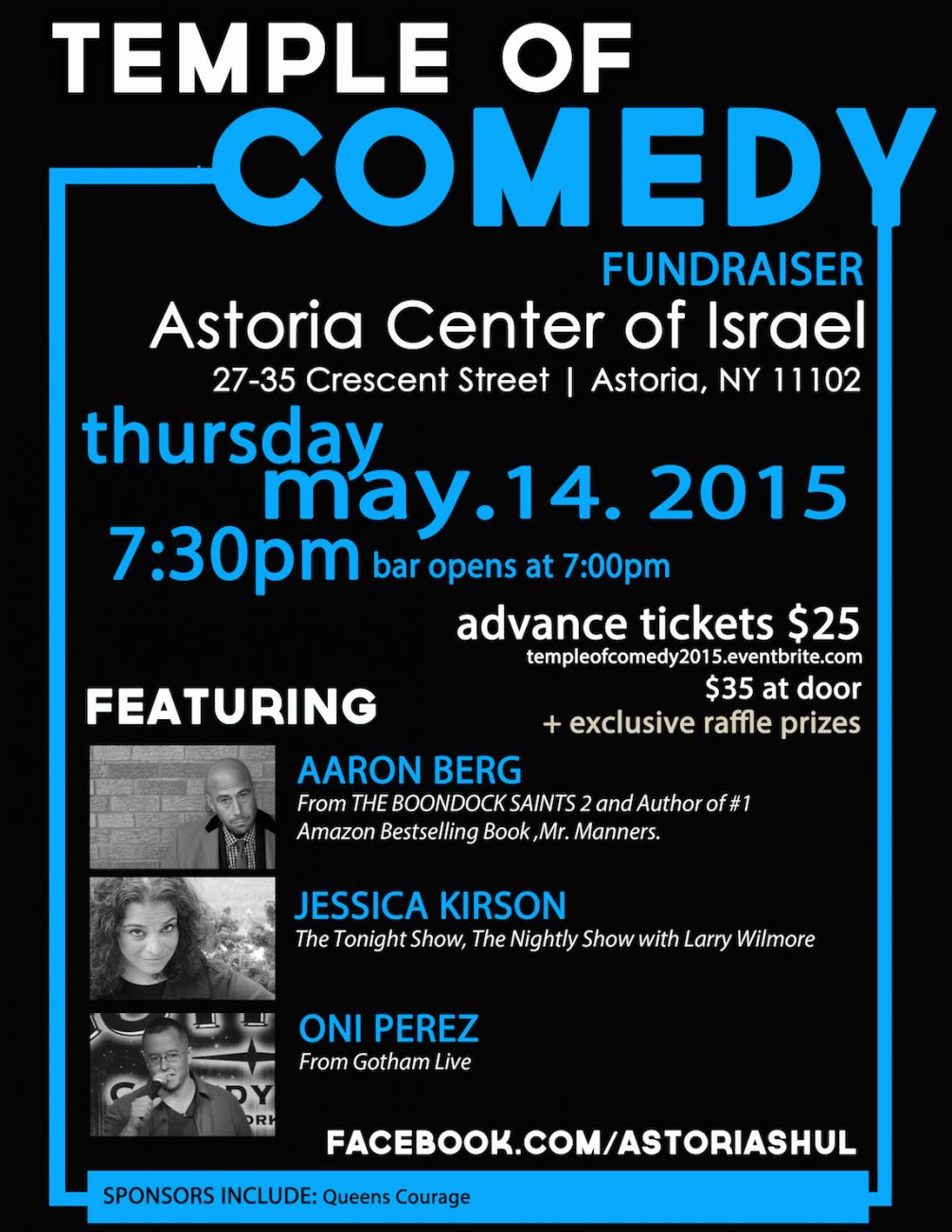 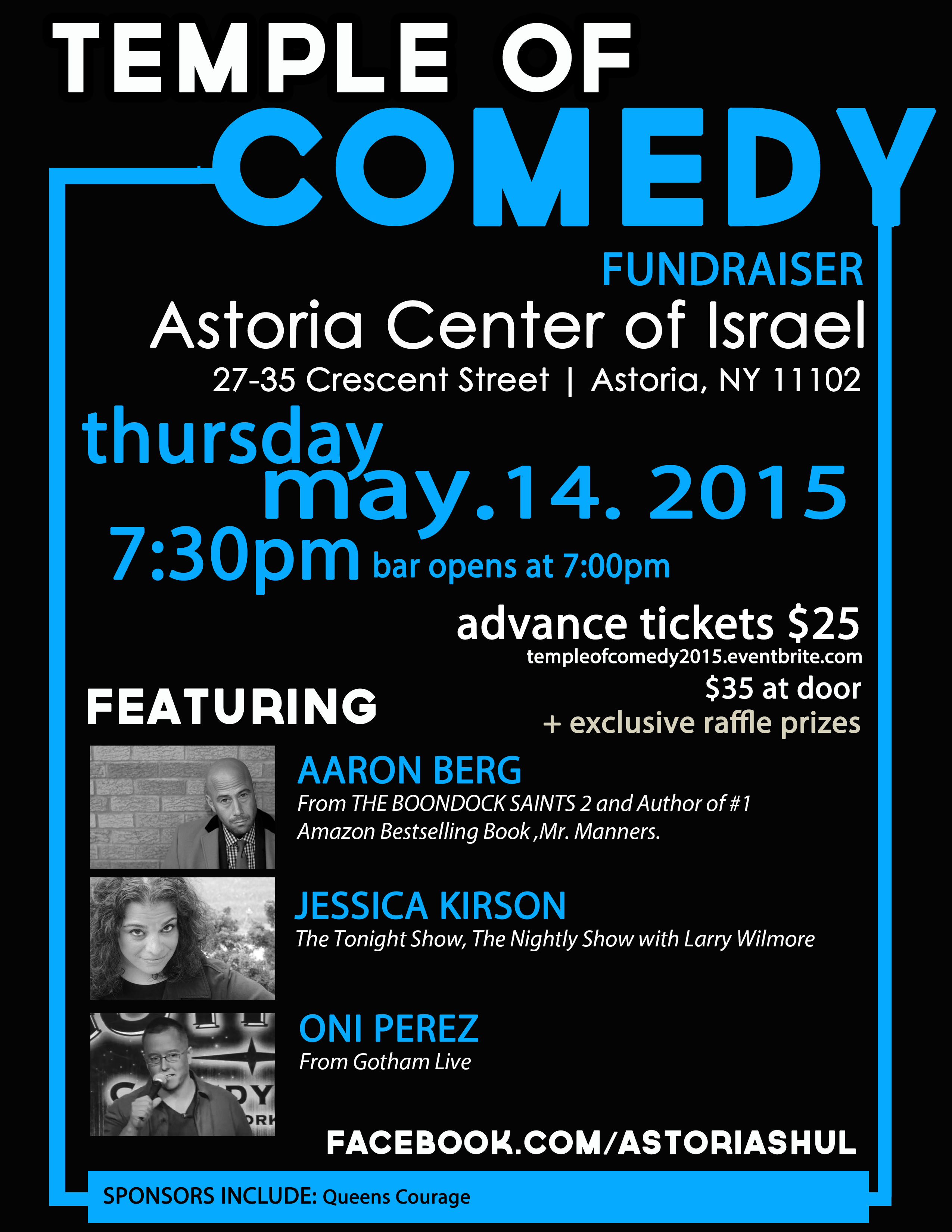 Jonathan Forgash joined Astoria Center of Israel Synagogue six years ago, and three years found himself on the board, serving as the Secretary of Finance. He quickly realized that fundraising needed to be done, but he wanted to do it in a way that was actually fun – something that served not only the synagogue, but the members of the community that it resided in as well.

So the Temple of Comedy show was started: a comedy show that guaranteed laughs, and served everyone in the community equally – because who doesn’t like to laugh!? The show is happening THIS THURSDAY, May 14th, at 7:00 p.m.

The event is a fundraiser for the historic, 90-year-old synagogue (which now boasts a growing membership, overflowing programs and activities), and will take place in its famed Art Deco sanctuary.  The synagogue has held a place in the Astoria Jewish community since 1925, when the building was first erected. Throughout its long history, became and remains the dynamic Jewish spiritual, social, cultural, educational home to a multitude of people. In 2009, Astoria Center of Israel was added to National and State Registers of Historic Places – so it’s a great place to check out in the neighborhood, if solely to witness its grandeur, beauty, and historic significance.

Added to the synagogues awesome events is the annual comedy show. The first year it was all semi‐professional amateur comedians, and last year was all comedians from the Laughing Devil Comedy Club. This year, Jonathan has used the entire show budget to get the funniest comedians in New York City.

The featured comedians are:

Jessica Kirson – Has earned awards as “Best Female Comic” and “Best Stand-up Comedian in New York City,” and appeared on The Tonight Show and The Nightly Show with Larry Wilmore.

The coolest part isn’t the comedians though, but the neighborhood coming together to support the show. Each year, there’s DOZENS of free raffles and giveaways.

“I work in catering for film and television in New York City,” Jonathan (who is the chef and owner of Starstruck Catering) tells us, “I began to reach out to all my chef and restaurant friends. They embraced the idea completely, and suddenly I had gift cards worth hundreds of dollars being offered to be raffled off.

This year we’ve received more than 20 gift cards, to places like M Well Steakhouse. It’s something that the restaurants and businesses do completely out of the generosity of their own hearts, for nothing in return.” Each year, the raffles raise more than 50% of the funds from the night. You can see the entire list of raffles below!

Now, don’t think this is a stuffy show that’s just using the synagogue as a venue. The Rabbi, Rabbi Pearl, is a huge music fan, who looks forward to hosting even more events – keeping up with modern day residents, while keeping up classic values in an ever changing neighborhood. People are always amazed that the comedians perform in the historic main sanctuary from the bimah (pulpit)!

The show is always a success, with audience members being nearly equal between member of Astoria Central of Israel, and people living in the greater Astoria area. Everyone spends the night laughing along and entering to win the awesome prizes. Plus – there’s a wine and gin bar, and you can’t beat that. It’s definitely something worth checking out!

Bar sponsored by: Queens Courage, Haber’s Tonic (both are from Astoria NY)