There’s Only One, Parisi Bakery! 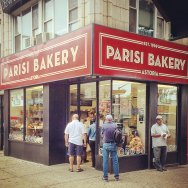 It begins at 6pm the night before. Around 700lbs of flour is poured into a giant mixer. The same mixer that’s been used since 1969. After the flour is done, 2 workers begin the rolling. Not with machine, no that’s too new school. Not even with a roller. By hand. Around 1900 loafs. After their done rolling, they place the dough into a Proof box, where it will sit for about 45-65 minutes rising to its perfect umpf.

Then, it’s the oven. Rotating blissfully away, loaf sitting gingerly next to loaf. And finally, the cooling racks.

Rye, Whole-wheat, Sourdough, Pumpernickel and many more, each baked to perfection. In a working week, Parisi will go through 1200 pounds of floor. In a weekend, 1800.

The process is finished by 2am, after which another shift starts all over again till 12.

25 different types of steaming fluffy fresh breads delivered from 3am to 8am.

“While most of Astoria is sleeping, we’re delivering all over NYC including LIC and Manhattan” says Joe.

All the bread that doesn’t sell, gets donated to charity, with some bits made into bread crumbs.

And this is the way it’s been, for almost 70 years.

From the start, with Anthony (Tony) along with Sabastian (Buster) Parisi starting it all, until close family friends Joe and brother in law Frank took over in 2009, continuing the tradition.

“It’s a passion” says Frank. And having seen how they do it, and how much Astorians love their breads, it’s easy to see why.

The Parisi Bakery has become a staple in Astoria. Their loyalty to the old school method of baking bread has kept them very much alive and thriving.

As Frank – who started in the business at 13 sweeping floors – says, “You gotta love the business. The product has to be to our standard”.

Joe and Frank however haven’t completely stayed in the past. They see how much Astoria is evolving.

‘It’s great to see how much Astoria has changed for the better over the years, how diverse it’s become, and how through it all we still see the new generations returning to the traditional bakers”

Joe says as he opens the oven. We peer through only to be taken back by the smell of steaming fresh bread, enveloping us before our senses snap us back.

And it seems like their changing right alongside it.

Their baking will always remain the same, because well, if it’s not broke why fix it? But the options will be bigger.

The request for gluten free and organic have been – in recent years – sweeping their way across the country, and Parisi sees this.

“It’s not that easy, we need all new equipment for Gluten free. Ovens and mixers. The lot. There are regulations. But we think maybe by 2017 we’ll have it in”

The bakery is also looking to expand, with plans to incorporate a café somewhere on the premise where patrons can come and have a coffee while cracking away a warm piece of bread, or munching on some of their sweeter choices of cakes and cookies.

Whatever the future holds for Parisi, it will be one filled with the same love and quality it started with, and is continuing with today. That’s why Astoria loves it, that’s why NYC loves it. And that’s why Parisi is a place which we know will always grace our street.

From the start, with Anthony (Tony) along with Sabastian (Buster) Parisi starting it all, until close family friends Joe and brother in law Frank took over

in 2009, continuing the tradition.

And the family have been the proprietors of the bakery since its beginning, when Joes uncle started it all.