How Safe IS Astoria For Cyclists?

The map certainly paints a picture. The accessibility for bicycles in Astoria is to put it nicely, wanting.

There are only a few stretches of road where a bike can somewhat travel freely in its own lane. And attitudes towards cyclists, or cyclists towards cars are to put it mildly, less than friendly. 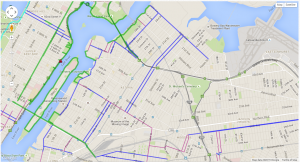 But will that change?

With the coming of Citibike, it might have to.

Increasingly popular, Citibike began its introduction to NYC in a big way, riding into neighborhoods all over.

And with it, we may see some change, not only for cyclists but also, pedestrians alike.

In a statement sent to Give Me Astoria, Council Member Costa Constantinides said,

“As we move toward a more inclusive and sustainable future, our city must embrace a multi-modal transportation network.  This includes infrastructure for cyclists, pedestrians, and motorists.  Dedicated corridors for pedestrians and cyclists generally improve the accessibility and traffic safety in our communities.  With the expansion of Citibike coming soon to Astoria, we must consider all solutions that will improve street accessibility.”

This need for serious consideration on road changes also comes in light of the death of student Kevin Lopez earlier this month, after he was hit by a car while riding his bike at Queens Plaza. Lopez (20),  who was studying business at school, was riding in the bike lane when struck by a Mercedes, passing away one week later in hospital.

For now, no plans have been put in play to extend bike lanes or build new ones. But with the introduction of the increasingly popular Citibikes, and the danger which cyclists face by rushing motorists, a solution to the issue must be explored.

But the question will still remain, will a change in street infrastructure, to accommodate multi-transportation, have an effect on road attitudes?