Hopes for Riverfront Extensions on the Horizon 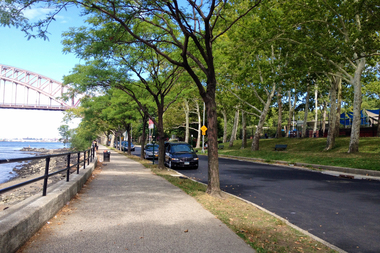 For a riverfront neighborhood, Astoria's riverfront can sometimes be viewed as lacking, compared to the rest of NYC.

However, that may all change. Or at least, it's in the minds of many who are involved with Astoria, including Councilman Constantinides, who at Saturdays Waterfront Festival, told reporters of plans to make it possible for pedestrians to walk along the waterfront, from Astoria Park, to Socrates Park.

So whats the plan?

Well, if it goes ahead, the riverfront will see a new eco-dock, allowing vessels to pull up to it (like the one in Bay Ridge).

The dock could also have a kayak launch which would not only get the community involved, but also has the opportunity to provide education on local ecosystems.

The project would also work well with the Hallets Cove playground upgrade, which is also on the list.

And a Citi Bike to the area would be the final piece to the puzzle, creating an environment that will see many people utilizing more space along the waterfront, according to Queens Chronicle.

In this years budget, both Constantinides, and Borough President Melinda Katz had put $1 million aside, which secures $2 million so far.

The Hallets Cove playground upgrade already has $1.2 million saved, with $1 million coming from Katz and a further $210,000 from the councilman’s discretionary budget.

Although it would be great for the project to coincide with the ferry program starting in 2017, there is unfortunately no timeline as of yet for the riverfront plan.

Constantinides stated that extensive planning and research was needed before anything else.

With all these ifs and buts, some Astorians feel that projects like these have been in the works for years already.

But, perhaps with the recent developments that have already begun in Astoria and greater Queens, maybe it's a catalyst for further change that benefits the community?

The riverfront has a beautiful view of the city, and an extended version would certainly be a welcome one.