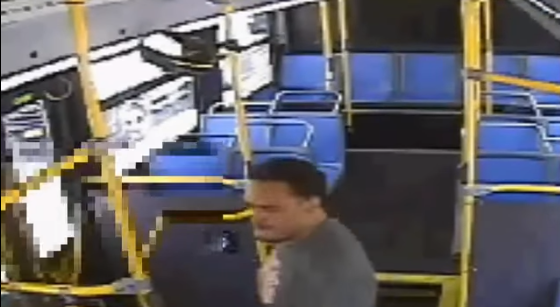 On July 8th, just after noon, a man riding on the Q66 around the corner of 21st Street and 35th Avenue approached a 32 year old victim who was sitting on his own, and punched him.

The below video shows the encounter taking place. The suspect, who seems agitated, gets off his seat and moves toward the victim. Then he proceeds to punch him and move on.

According to police, the victim exited the bus and made his way to a hospital nearby. There he was treated for a cut on his face and dismissed.

The man who punched the victim got off at the back of the bus. He was described as being 30 years old, standing about 5 feet 8 inches, with short dark hair, a mustache and a goatee. He can be seen wearing dark pants with a a gray shirt.

*Featured Image And Video Via DNAinfo.com