Stupidity And Hate Crimes Rise As Some Take Stand 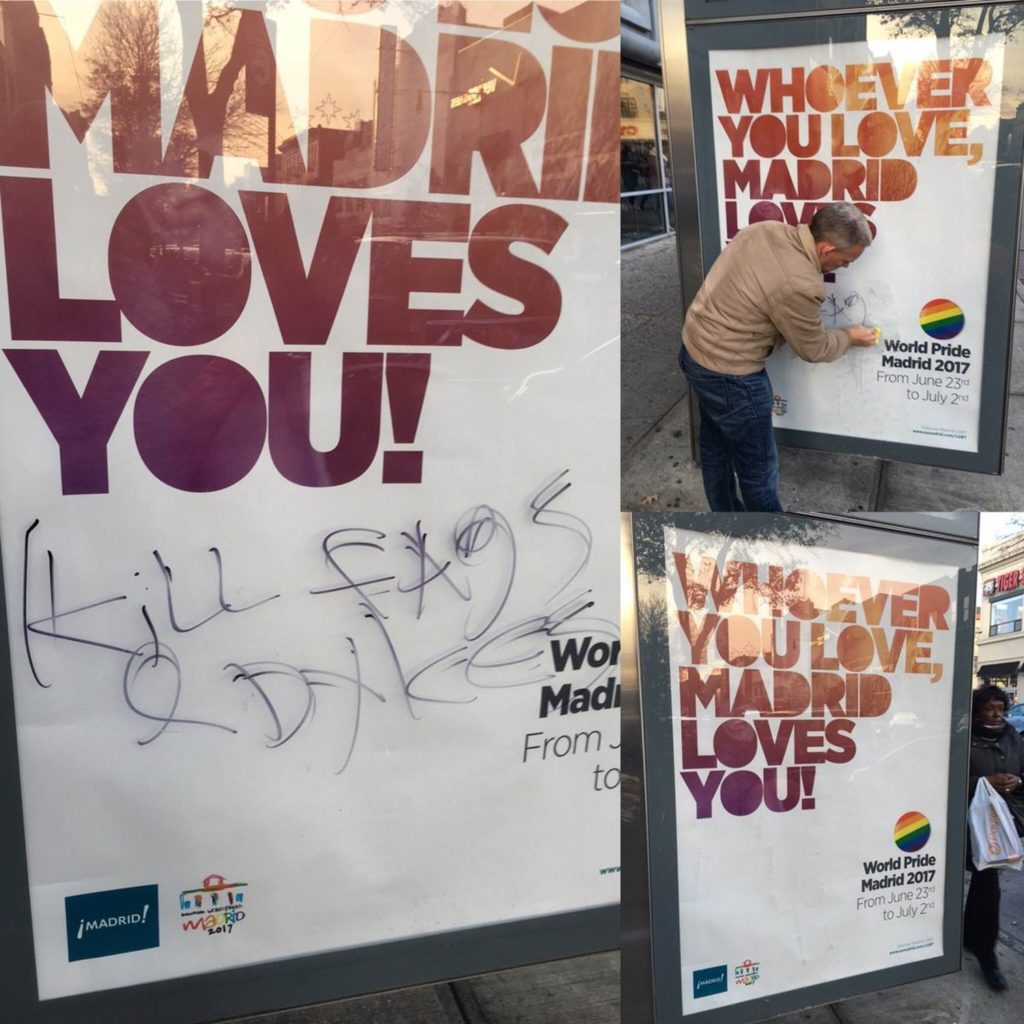 While there are those who have begun rallying themselves behind prejudice and hate in accordance with the recent election, there are equally if not more who rally behind acceptance and tolerance. Recently we have seen both sides of the coin flip through New York City, even to our own backyard, Astoria.

A city built on diversity is now being faced with bigotry and homophobia on the tail end of the new political presence. Among the recent spats of rage and ignorance has been hate fueled anti Muslim remarks, physical violence and more. Now it would seem the LGBT community has been the focus of recent un human like conduct.

An Astorian resident recently posted a picture of a bus shelter in Astoria which immediately caught Councilman Jimmy Van Bramer’s attention. The photograph shows the words “kill fags & dykes” graffitied onto a poster for the World Pride Madrid 2017, December 4th. The ad can be seen on a bus shelter on Steinway Street and 31st Avenue.

Connor Mealey noticed the homophobic slurs and took the picture, posting it to Twitter and asking the Department of Transportation and Councilmen Bramer and Constanitinides to remove it.

“This anti-LGBT grafitti [sic] has no place in #Queens, #NYC or anywhere for that matter..NOT #QueensValues.”

A spokesperson for Van Bramer stated that the councilman then proceeded to scrub the words out with window cleaner.

In a statement from Van Bramer as reported by QNS, he states that “hate crimes are on the rise…It’s on all of us to step up and say loud and clear that these are not our values and this is not normal. When a constituent notified me of the hateful and homophobic graffiti on this bus shelter, I reported it immediately, but couldn’t stand to see it up a second longer—so I cleaned it up myself. I know that in Queens, we value and celebrate our differences, and when we come together, love will always trump hate.”

Numbers have risen for hate crimes since the election, according to Police Commissioner James O’Neill. A 31 percent increase from last year, with increases in anti-Muslim and anti-Semitic hate crimes.

Last month at the community council meeting, Deputy Inspector Peter Fortune of the 114th Precinct also had words about hate crimes in the area.