The App Everyone In Astoria Should Have

We currently live in a world where there is an app for pretty much anything. From shopping, to running, to dating, to building farms. If there isn’t an app for it, you just haven’t found it.

So it makes sense that New Yorkers, or Astorians especially, should have an app for some of the awesome things that happen daily right here in our neighborhood. 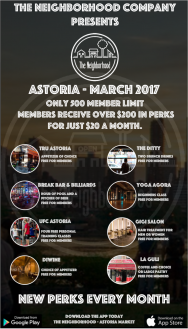 Step in Astoria resident Christy Aborn and her business partner Brock James. The two recently launched The Neighborhood. An app that lets users explore all the great specials available throughout Astoria, and enjoy the perks and discounts that come with the app.

Newly signed up users will receive 8 perks per month. The perks range from appetizers to yoga classes. Valued at $15 to $20 each, the $20/month access fee for the app certainly seems like a bargain (and we love those!).

It started off a year ago, with the two business partners contacting companies around the Financial District where they both work. What began as booklets and vouchers that were redeemable at local businesses, quickly turned into the blue prints of an app that could do it all. At the click of a button.

Aborn, who is only 25, launched The Neighborhood Company right here in Astoria because of the strong community feel. In an interview with QNS, Aborn said,

“It would just be great to give back to the community….I’ve never lived in a place that’s so locally driven and everyone is about helping each other.”

Some of the perks that users were privy to in March included beginners classes at Yoga Agora, two brunch drinks at The Ditty, an hour of pool and a pitcher of beer at Break Bar & Billiards and more.

“The local business[es] love it because [we’re] such a new company [that] we don’t charge anything,” Aborn said. “Our whole thing is [giving] back to the community. We’re free marketing for the businesses,” Aborn told QNS.

Marketing like this comes with its own perks. Businesses involved in the app usually see return visitors, and according to Aborn, most people end up spending three times as much once they’re actually there.

The hope is to launch the app in a brand new neighborhood every time The Neighborhood hits the 500 user cap. Williamsburg and DUMBO are next on the list, with a plan to launch in 10 neighborhoods across the city for the next two years.

Want to give it a try? Check the app on iTunes or Google Play, click here.