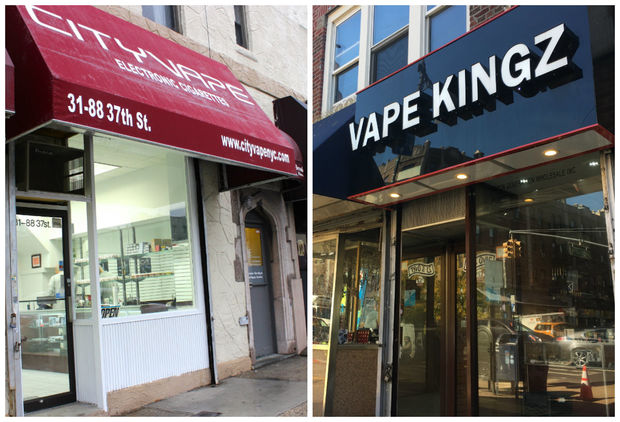 It’s the tale of two Vape shops embroiled in an e-cig feud.

According to DNAinfo, the lawsuit was filed against Kingz for continuously trying to interfere with City Vape’s business.

Kingz is accused of fraudulently racking up thousands of dollars in credit card charges to City Vape. Along with; trying to bribe vendors for information regarding the rival e-cig store, and physically tearing down advertisements and replacing them with their own.

Spiro Dogaris, the owner of City Vape, said that Kingz’ employee Daniel Fagadar ordered $5,000 worth of vape liquids, back in August, by pretending to be him while on the phone to an e-liquid manufacturer. When Dogaris called the manufacturer to dispute the purchase he was given a recording of the phone call, in which he identified his rival e-cig store.

A recently passed city law which will take effect in January will require e-cigerette dealers to be licensed. The law will hopefully help cut down on unsavory businesses in the vape industry, an industry that has had an international surge in recent years.

The sabotage continued, according to Dogaris, who claims that Vape Kingz’ employees would often be sent out to remove City Vape advertisements from public places and replace them with their own.

Other times, Kingz would try and bribe e-cig vendors in the hopes they would give them confidential information regarding Dogaris’s business, according to the lawsuit.

Dogaris is seeking $5,000 in damages and a restraining order against Vape Kingz. DNAinfo reported that an employee of Kingz said that they have yet to be notified of the suit.

Fagadar, who said he currently does not work at Vape Kingz denied hearing of the suit. Or of impersonating Dogaris. Fagadar told DNA that he and Dogaris were once business partners, before the business fell through, and that Dogaris “screwed” him over and is “trying to get money.”