Pao & Cha Cha is an Astoria restaurant specializing in Chinese Latino Cuisine. Located on 2303 Astoria Blvd, if you’re a little unfamiliar with what Latino Asian cuisine actually is, you’re in luck.

In a video by Remezcla (below) three of New York’s Chinese Latinos chefs explain the culinary phenomenon that has people licking their lips.

One of the three chefs is Astorias very own Guillermo Hung, of Poa & Cha Cha. If you’ve never met him then do yourself a favor and visit Poa for a dish or two. More often than not you’ll find a group of people congregating outside the Venezuelan-Chinese hole in the wall.

Have you tried Pao & Cha Cha in Astoria?

No doubt you’ll be greeted by a group of friends sharing conversation outside as the married chef couple that own Poa are busily cooking up a storm inside. Handling multiple dishes at once. Turning out empanadas deep fried to perfection, or their popular chorizo burger, topped with Sriracha mayo and Venezuelan slaw.

So whether you’re in the neighborhood or not, grab a drink, and some kimchee tostones, and join the crowd. 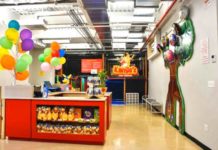 Enjoy fun for the whole family at Kanga’s Playcenter!