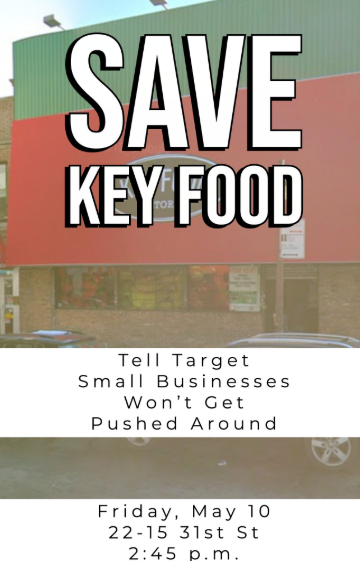 On Friday May 10th, Astoria politicians and community activists alike are set to protest against the demolition of storefronts such as Key Food, Subway, Cohen’s Optical, and more. The reason behind the new construction plans? As reported by The Astoria Post, Target’s Astoria storefront is set to open in the exact location of the demolished stores.

Those set to rally include Council Member Costa Constantinides, as well as State Senator Jessica Ramos. Both Constantinides and Ramos point out that dozens of union jobs will be compromised, such as those who are employed by Key Food, if the plans for demolition do indeed come to fruition.

The rally is set to begin May 10th at 2:45PM, at 22-15 31st St. For those interested in attending, additional details can be found on the flyer above.