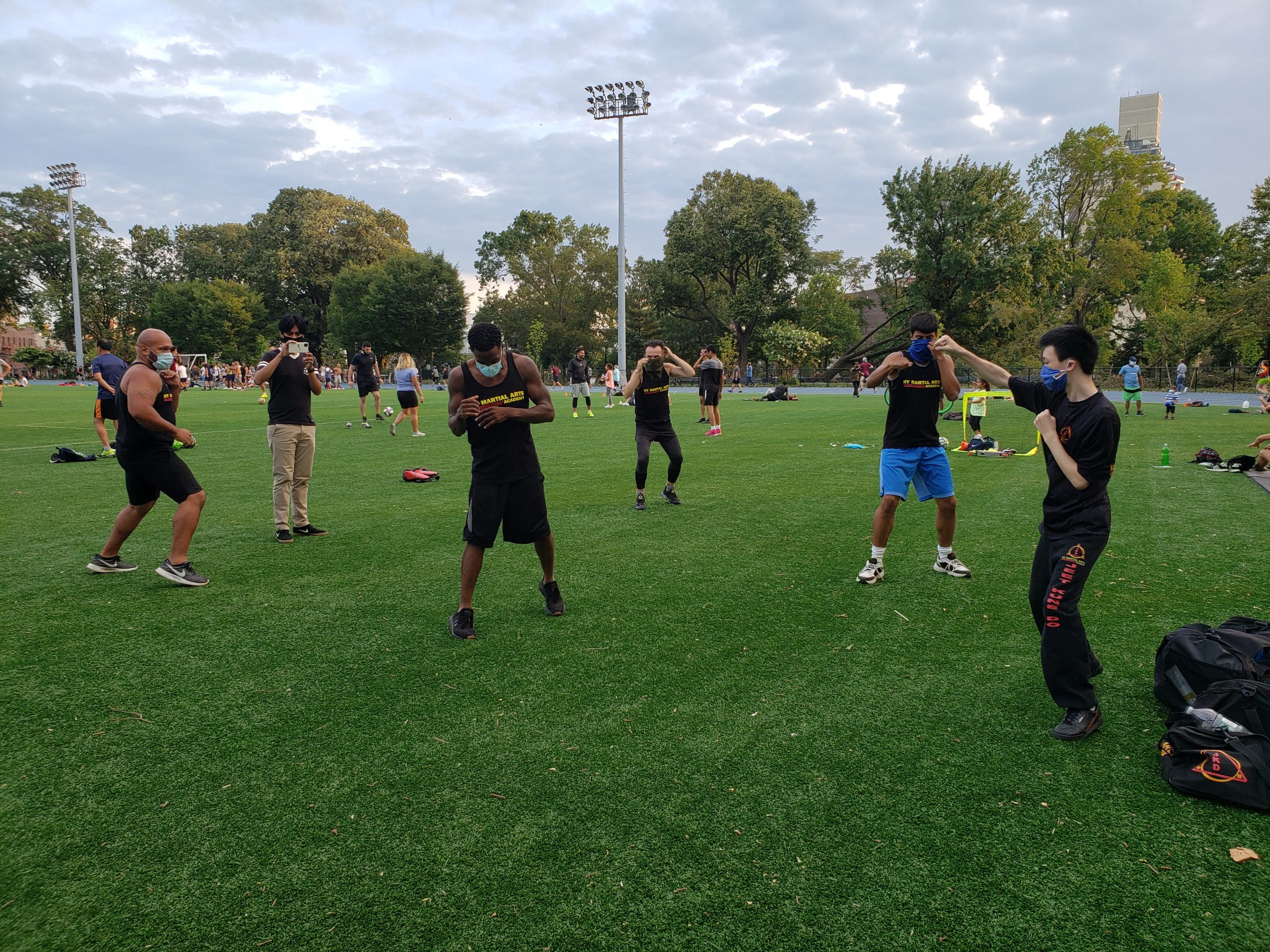 Take a walk through Astoria Park this summer and you’ll see that for many local trainers and fitness facilities, the outdoor haven has become their new home. With the announcement that gyms are to remain closed after being removed from New York State’s Phase 4 reopening plan, some people have adapted to home workouts and tuning into streamed classes online. For the students of New York Martial Arts Academy, the Jeet Kune Do school not only provides a workout and a form of self-defense, but has become a second home for a community which feels that personal interaction is no comparison to interacting throughout livestream.

When the school was shut down in March, the NYMAA, like many fitness facilities, immediately started offering livestream classes for kids and adult classes via their YouTube and Instagram pages. But the one-sided classes and lack of real-life interaction simply wasn’t enough for instructors or students who would normally see each other several times a week pre-pandemic. Since mid-July, the school has been giving outdoor classes which are free and welcome to current students and newcomers interested in training.

“With the virtual classes, the instructor is demonstrating and the students are following along, but the classes in the park allow for the instructors to help the students out, and it allows the students to get together, see friends, and build on their relationships especially during these tough times,” said Irene Triant, the school’s administrative director.

The NYMAA Jeet Kune Do school located on 25-04 Broadway is one of three locations throughout NYC, including Williamsburg and Little Neck which is home to their flagship location that opened in 1985 by Dino Orfanos, a lifelong martial artist who was born and raised in Astoria and passionate about spreading the life-changing teachings of JKD. He passed the school down to his son, co-owner James Orfanos who grew up on the art’s teachings. For many students who have had to adapt to life with the school’s closure, the classes in the park are a welcome delight in the midst of overall uncertainty about the future.

“The main thing for me is having that human interaction,” said Ramon Aleman, a student since 2012. “A lot of people feel complacent with having digital interaction, especially in this era of social media, but having an outdoor class with other people, it kind of brings normalcy back to life that we lost in early March.”

Training in real time has helped some younger students stay focused, as Lenny Lan observed with his 7-year old daughter Brooke, who has been training at the school for three years. “She was doing the livestream classes at first, but because of the lack of interaction, she lost interest in it,” said Lan. “When they started doing it at the park, obviously we wanted to make sure it was safe before we started bringing her, but it’s the interaction and the critiquing [from the instructors]. She likes to know how she can be better. So I think that’s what she enjoys the most out of it.”

The NYMAA also has a Long Island location in Glen Cove.

“Since 1985, we have adapted many times just as Jeet Kune Do teaches and this is just another example,” said co-owner James Orfanos. “There will be more outdoor classes for kids and adults and we are going to have an expanded schedule of our classes in the park for all four locations. We are also building the backyard of our Little Neck location into an area with [hitting] bags where there is enough room to have a class.”

As the school continues to be optimistic on an announcement of a reopening date sooner rather than later, the staff and students continue to remain flexible and are being creative about finding ways to safely get together and train.