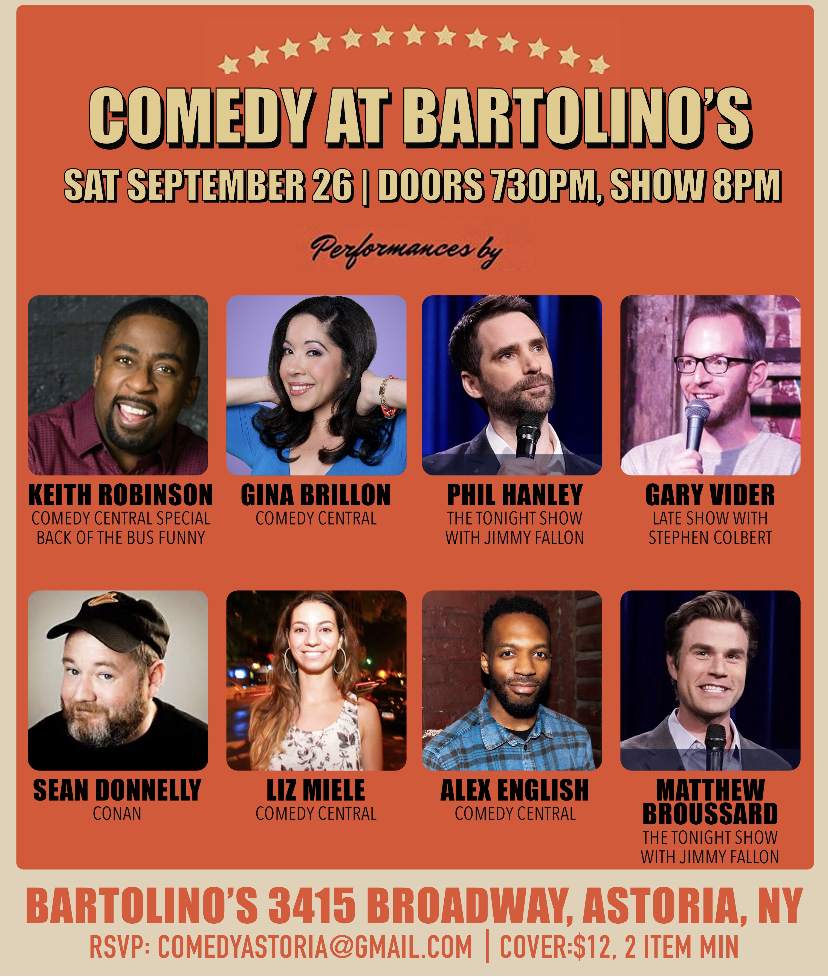 The comedy scene in New York is unlike any other. A quick search for your favorite comic, and chances are they’ve likely performed on one of the city’s stages.

So, when COVID-19 forced comedy clubs throughout the city to close, the industry took a hit. Fortunately, some comics in the area have been able to put their improvisational skills to the test and host socially-distanced, outdoor comedy shows.

And now, there’s one right here in the heart of Astoria!

Hosted on Saturdays at Bartolino’s from 7:30-10PM, Comedy Astoria brings notable names from around the area to perform sets for those who love to laugh. And, let’s face it, who couldn’t use an extra laugh these days?

Organizer and noted stand-up comic Gary Vider has been hosting the weekly event for nearly a month to much success. Comedy Astoria has seen performances from notable stand-up acts featured on Netflix, Comedy Central, Conan, and more.

“So many comedians live in Queens because it’s affordable and cool. Astoria is an awesome neighborhood, I’ve lived here for 12 years. There wasn’t a comedy scene in Queens and so many comedians live here. NYC is best place for stand-up comedy [and this is] a great way to bring good quality comedians to Queens”, shared Vider, who has appeared on The Late Show with Stephen Colbert, Conan, and America’s Got Talent.

Comedy Astoria is held in Bartolino’s outdoor private space and is ideal for social distancing. The show takes place, rain or shine, underneath a tent which holds a maximum of 50 guests. Food and drinks are also available for patrons, to embody the experience of a real comedy club.

Give Me Astoria would like to extend a special thank you and congratulations to Gary Vider and Bartolino’s for bringing this safe and fun experience to our neighborhood! Want to learn more about Comedy Astoria? Be sure follow them on Instagram, or send them an email at [email protected]. Interested in purchasing tickets for this Saturday’s show? Please visit the official event page here.