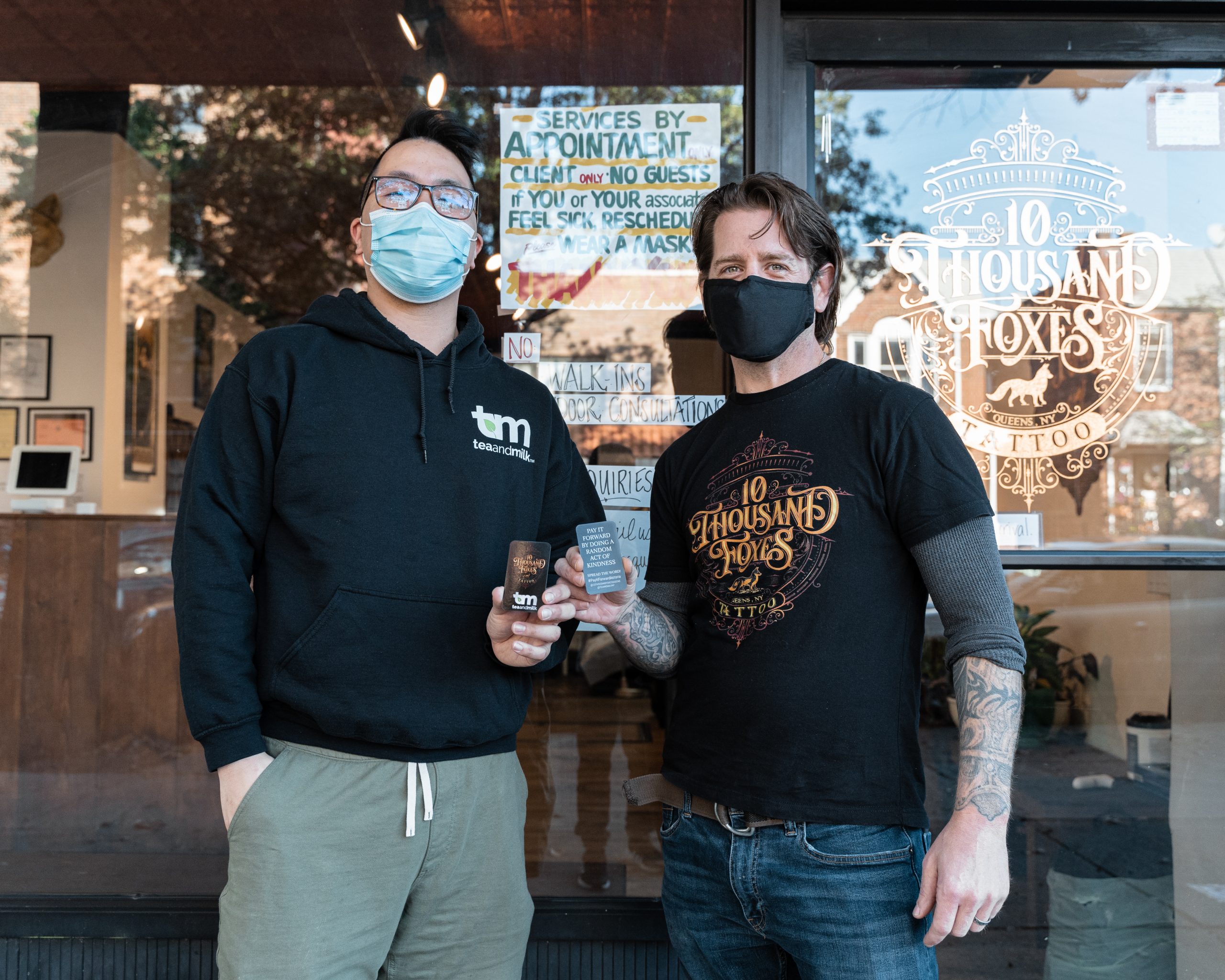 The coronavirus pandemic has been a difficult time for the Astoria community, with many Astorians fleeing to different neighborhoods, avoiding nightlife, and curbing their spending at neighborhood businesses. Local business owners Tim O’Connor and Mathew Wong hope to restore Astoria’s strong community spirit through a new campaign of kindness and charity that they’ve dubbed #PayItForwardAstoria.

The initiative is focused on the small favors that Astorians can do to help their neighbors feel like they are part of a welcoming and cohesive community. To get things going, O’Connor and Wong are paying for a set number of free drinks each day at Wong’s business, Tea and Milk. Each free drink includes a card stipulating that the recipient must turn around and do a favor for another resident of Astoria. This favor could be a financial one, as in the case of the free drinks—or it could be as simple as holding a door open for a stranger or helping someone carry a heavy bag of groceries.

The idea was the brainchild of O’Connor, the owner of 10 Thousand Foxes Tattoo.

“I told Matt I would like to do something where I pay for a certain amount of his customers’ drinks on a given day, and just ask them to pay it forward with a random act of kindness.”

Wong gave his emphatic approval to the idea and a partnership was born.

“The most important part is that it’s not just marketing our businesses,” Wong said. “It’s us finding ways to give back to the community, as they have supported us throughout these times.”

Along with the #PayItForwardAstoria hashtag coined by one of O’Connor’s apprentices, the instruction cards include the logos of Wong and O’Connor’s businesses—but Wong and O’Connor do not claim ownership of the initiative. They’re excited about the idea of other local businesses jumping in independent of their own efforts.

So far, several other local businesses have joined the campaign, including Give Me Astoria.

“When Matt and Tim told me about the idea, I was so excited,” said Give Me Astoria founder and publisher Sonia Mylonas. “#PayItForwardAstoria is an amazing initiative that will not only lift our spirits but inspire generosity and compassion. The concept is simple, yet anyone can pay it forward by just doing a good deed for someone else. Businesses can jump on board and start their own movement. We hope you guys enjoy the drinks and don’t forget to #PayItForwardAstoria.”

The team-up between O’Connor and Wong is a perfect display of the amount of compassion in the Astoria community. The friendship between the two predates O’Connor’s ownership of 10 Thousand Foxes Tattoo; when O’Connor was an employee of the tattoo parlor that preceded his business, they would often meet outside their neighboring workplaces to shoot the breeze during breaks. Owning adjacent businesses has only deepened their friendship.

“We really take pride in ownership, pride in the block, and how our businesses affect each other,” O’Connor said. “We’re in it together.”