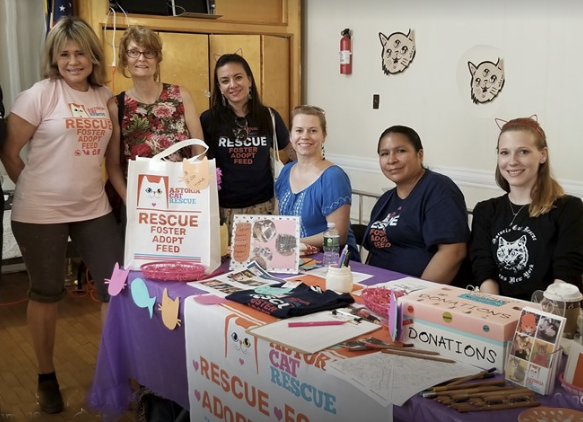 When our furry, feline neighbors need some love and care, Astoria Cat Rescue is there.
Established in 2014, the non-profit, Astoria Cat Rescue, has been working to protect and reduce the feral cat population in the area and surrounding neighborhoods by providing food, shelter and both rescue and adoption services. They also engage in ongoing Trap-Neuter-Return (TNR) work, which is proven to be the most effective and sustainable solution to assisting the estimated 9-10 million feral cats in New York City.

Astoria Cat Rescue’s rotating team of volunteers, lead by Charlotte Conley, works around five to seven hours each night to dish out food to 17 different cat colonies, including the 25 cats they shelter on their own property – that’s around 150 to 170 cats per night, and an expense totaling up to $500 each week that too often comes out of Charlotte’s own pocket.

A typical night for these volunteers (sometimes only one or two at a time) begins at 5:30pm when they set out with their food and water supply using biodegradable plastics and paper bowls. The team serves as many colonies as they can, makes sure no garbage is left behind and then they do it all over again the next evening. They’ve provided a variety of shelters in all the areas they visit to ensure the cats are safely housed and warmed, especially during the winter months.

“These animals are suffering…Once you see it, it’s hard to turn your back on,” says volunteer, Stuart Kroll.

Tracy Burg, their adoption coordinator, communicates with the public via social media who informs the organization about any abandoned, sick or injured cats or new litters
that pop up. After providing TNR service, cats are put in volunteer foster care until they find a safe and loving home, which is not an easy task as some of these cats come from harsh conditions, making them a bit distrustful. “We listen to the need of the person and the cat,” Tracy explains. “When they find the right fit, it makes it all worthwhile.”

One amazing rescue story comes from a kitten they named “Heart” who was found trapped inside a cat carrier and tossed in a garbage dump. After some rehab, he was adopted and living a happy life. Charlotte strongly believes no living being should suffer such inhumane actions. “These are creatures created just like us. They deserve real love and care.”

Charlotte was part of a similar spay and neuter organization in Greece before moving to Astoria in 2008 to be a business professor for SUNY. She then expanded and offered the services of her friend, now 94-year-old Lee Scimeca, who dedicated part of her life to helping the cat population here. Today, Astoria Cat Rescue is a member of the Mayor’s Alliance for Animals, ASPCA-recognized and TNR-certified.

Still, there is a disproportionate lack of support and publicity for these institutions. Since the COVID-19 pandemic, the ASPCA has cut funding and resources of the spay/neuter services that thousands of animal rescue organizations rely on. “All rescuers thrive on being able to spay and neuter for low cost or no cost,” explains Charlotte. Cats can reproduce every two months, so without these services, years of spay/neuter work have been undone and lost. “Feral cats are as endemic as squirrels…Municipalities aren’t doing what they can to stop it.”

For Charlotte and her volunteers, the hardest part is often people, due to miseducation and misinformation. Astoria Cat Rescue’s mission is to stop the procreation of the feral cat population while simultaneously providing care, food, shelter and salvation to the cat colonies that live among us. You can join their efforts through volunteering, donating and helping spread awareness of their initiative and ultimately, be a part of healing our neighborhood’s ecosystem.