Your go-to guide for Gay Pride

If you’re a seasoned Astorian, you’re probably familiar with New York’s LGBTQ+ history and origins. If not, then keep reading because you’re going to learn some things about our city’s rich, heartbreaking and inspiring journey.

We’ll get into Astoria’s gay nightlife scene of course, but first we’ll take a look at some of the seeds that blossomed into the community and culture we love and support today. There won’t be a quiz at the end of this, but try to stay with me.

Did you know that up until 1966, it was illegal in New York to serve alcohol to members of the LGBTQ+ community? Even years later, a same-sex couple could be arrested if they expressed any form of PDA. Wild, I know.

Because of this discrimination, members of the LGBTQ+ community congregated to local gay bars where they could be open in their sexuality. Naturally, the New York State Liquor Authority proceeded to shut down establishments that served alcohol to known or suspected gay patrons, claiming it was “disorderly.”

The raiding of gay bars and harassing of patrons then became a regular occurrence. A police raid at the Stonewall Inn on June 28, 1969 turned into the Stonewall Uprising and sparked a new phase in the LGBTQ+ movement in the US and throughout the world.

The bar’s patrons and local community stood up to the police, who arrested bar-goers and forced them out of the establishment while rebels threw objects at the cops, forcing them back into the bar. The rebellion continued for six consecutive nights in front of Stonewall and the surrounding Christopher Street area.

A year later, local organizers planned a march to Central Park and it developed into the global commemoration that we know today. In light of the uprising, the Gay Liberation Front was co-founded by prominent gay rights activist and drag queen, Marsha P. Johnson, in early July of 1969.

As for our beloved borough, the first Queens Pride Parade was held in 1993, a few years after the deadly hate crime against a gay Puerto Rican man, Julio Rivera, in 1990. A Bronx-raised Jackson Heights resident, Rivera was brutally slain by three men in a schoolyard, which, unfortunately, resembled many deaths of gay people around this time period.

“I’ve only ever been to one Pride in NYC and it was summer of 2019, [and] it was honestly one of the best memories of my entire life. Coming to NYC from the South, it was the first time I didn’t feel any fear to truly be myself. I could literally cry just thinking about it. It was one of the most beautiful and freeing experiences of my life,” said Astoria resident, Amy Suber. “I was in love; we watched the parade from a rooftop in Manhattan with all my friends. Everyone came together: gay, straight, some families of my friends. We all partied and celebrated on that roof the entire day and night.”

As you may know, Astoria is also home to multiple LGBTQ+ bars and businesses, such as Icon, Albatross and Fresco’s Cantina.

“Albatross has turned into such a staple in the community. So many amazing people, incredible talents and awesome staff have walked through these doors over the years. I’ve loved every minute of creating a safe space where people from the community can be themselves, forge friendships and have a great time,” said Albatross owner, Nathan Finnegan.

Albatross hosts weekly events with a variety of entertainers, including fab local drag queens like Petti Cash, who has performed at Albatross and Icon for four years.

“Astoria has such an amazing community and I’ve been able to build a more loyal following than I could in any other borough. I know that when I come in to do the show, there are a whole slew of people that are there to support me. It always feels like home,” she said. This month, Albatross’s event schedule is packed with drag shows, karaoke competitions and fundraisers.

As it turns out, Finnegan co-owns Icon with fellow Astorian, David Booher. Icon is known for their spirited nightlife and drag nights.

“I had lived in Astoria for about 15 years and remember when there were many gay spaces here. I was saddened to see them shutter one by one. When we found out that Icon was for sale, I felt it was important to not lose another gay space in the neighborhood. These places are vital for our community to gather, feel safe and celebrate each other,” Booher said. 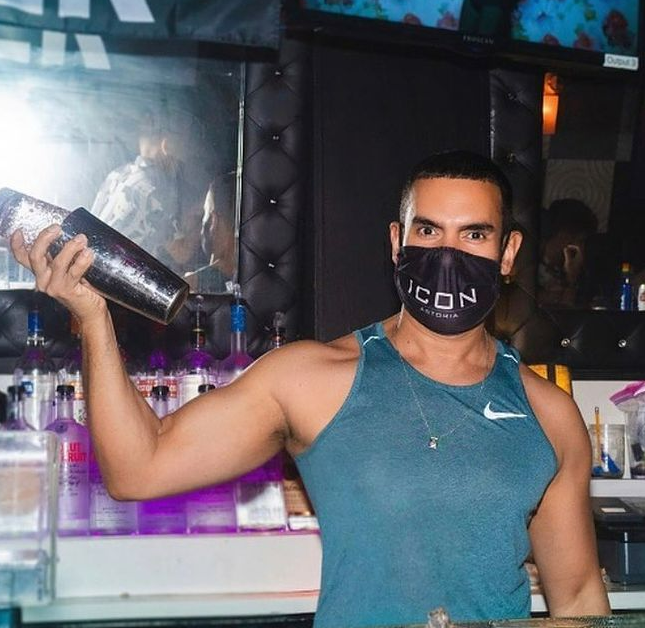 For this Pride Month, Booher and Finnegan planned special events every single weekend. With the world deep in COVID-19 last summer, the Icon community wants to make up for lost time.

“We sadly missed Pride last year, and it has not even been acknowledged by the White House for the last four years, so we’re ready to celebrate!” said Booher.

Petti Cash explains, “I always tell people at my shows that it doesn’t matter what gender you identify as, what your sexuality is; as long as you are respectful of me, the bar, the staff and everyone in the room, you are welcome in the space. The community here is so inviting of people of all different sizes and colors; it’s why I continue to proudly work here.”

Gay-owned-and-operated for four years, Fresco’s Cantina is owned by couple Brian Martinez and Adrian Suero. The pair has been married for two years and has lived in Astoria for three-and-a-half years.

Sitting off the beaten path near Socrates Sculpture Park, this Mexican restaurant is known for mouthwatering cuisine and refreshing drinks, and especially their Sunday Drag Brunch and “Drag-livery:” a service they offered during the pandemic where a drag queen would deliver a customer’s food and put on a curbside performance.

“We wanted to have an additional service that was safe for customers who were stuck at home. It also kept four to five queens working during that time when they weren’t getting any other work,” Martinez said.

In-person Drag Brunch is alive and well, however. Two in-house drag queens, Hibiscus and Catrina Love Lace, host the event and Fresco’s selects a third as their guest queen. For Pride month, they planned brunch themes like Rainbow, Blue/Pink for trans visibility, Love the Skin You’re In and Confetti. Customers can participate in the theme and the “best dressed” will be awarded with their Mighty Mimosa.

With city life creeping back to its normal traffic, this year’s Pride is going to be extra special and maybe even unmatched.  If you do anything this month, carve a space in your schedule to celebrate the LGBTQ+ community and remember: love is love.